Don't Drift on Me

In addition to causing severe injury to newly emerging soybean leaves, synthetic auxin injury to soybeans can also lead to delayed maturity, decreased yield, and decreased germination of harvested soybean seed.  Field studies have shown applications of  dicamba at levels as low as 1/300th of the field rate for soybeans caused statistically significant field losses of broadleaf crops.  Yield reductions are especially intense when herbicide applications are made later in the growing season.  The late drift of dicamba, during bloom, has been demonstrated to cause reductions of up to 77% in marketable crop when applied at 1/100th of the soybean field rate.² 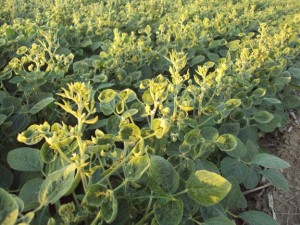 This dicamba drift damage occurred this summer (2012) to a soybean crop in Indiana. Note the yellow color, the cupping, puckering and crinkling of the soybean leaves. This drift incident caused a severe reduction in marketable yield. 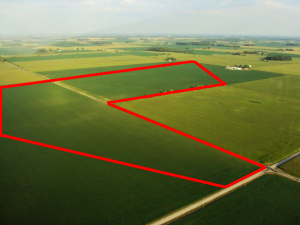 This is a birds-eye view of the devastation caused by this drift incident.  Notice the damaged area bounded by the red square.